This sort of thing happens to me often. You get tonkad by a haha, in other words, you end up doing things you never thought of doing, when you did them, where, and why, and how. And most generally it turns out to be enjoyable and interesting.

As it so happens at night, it got colder and darker with shares increasingly and progressively more-so. Basically, this means that when one forgets his sleeping bag, (or quilt and pillow, etc), good thick cold clothes, matches, and various and sundry other useful things for camping, one gets cold. So cold, in fact, that one begins shaking. This, as it so happens, is what ocurred to me; and I woke up about three-thirty in the morning shaking to beat the band. I tried to get warmer, but nothing doing. It’s not particularly easy to get warm when it has become somewhat more frigid outside, without the defensive forces increasing in proportion likewise. Finally I decided that it might would be a good idea to get into the faithful Oldsmobile, turn it over in the middle of the night and crawl in with the heater going full blast.

That decided, I hopped out of the tent as quickly as I could, and into the car, also as quickly as my freezing and shaking legs could carry me. It had occured to me that perhaps I was suffering from hypo-thermi-o-filical-osteo-disorder, and that the wisest course of action in such a scenario is to pursue heating arrangements. So thus I proceeded to turn the car over and smash the heater switch all the way up to almost-full-blast.

Not much goes on at a lakeside in the middle of the night, just so ya’ know. There’s not much to look at besides the lapping of the water, the wiggling of the leaves on the trees, and the darkness. All through, of course, eyeballs rolling with cold and teeth chattering.

Eventually, you will be happy to know (or displeased, depending on your mood) that the heater produced heat which in turn warmed my body. I also accelerated the process by eating some granola.

Even more eventually, after several more hours of morose arctic-ness, the sun came up in all its glorious-ness. I’d managed to snooze a bit in between staring at the lake in the darkness, and decided it was time to begin a new day. That said, I climbed stiffleggedly out of the car and started a brisk morning trot around the campground in hopes that it would warm me up a bit.

It didn’t terribly warm me up, mostly because there wasn’t much warmth out there to warm up with; but I did see a blue heron out in the lake and apparently he’d not forgotten matches because he was catching fish and eating them. So that was neat to see.

Eventually I made my way up to the extraction booth they have at the front of every larger kind of state or national park and chatted a bit with the guy there while I was being extracted for a night’s cold stay. I guess one doesn’t get reduced rates for temperature dips or having to put more CO2 into the atmosphere in the middle of the night. Anyway, this gentleman was very friendly, and we talked some, and he told me some other good things to see in the area if I had time. And I have to admit I really enjoyed hearing him tawwwk because he had jest a bit ahv ah southern drawwwwl.

Well I had a bit of time. In fact, I had most-of-the-day bit-of-time. I’d kind of hoped that I might find something interesting to fill in the time before I had to scoot down to Baker Creek, and, sure enough, that man gave me the tip. He said one must absolutely go to Ha Ha Tonka State Park. That’s the truth! You’ll have to wait to find out what Ha Ha Tonka means but it is the real name.

After stuffing the tent into the trunk (I didn’t even bother trying to make it fit into the little bag they put the tent in when they sell it to you; those bags are way too small, and they probably shrink after you take the tent out the first time. In addition to which the tent expands after the first use. Both of those make it impossible to fit the tent inside said bag; thus I do not even pretend to try anymore), I moseyed on out of Lake of the Ozarks because I’d pretty much finished seeing what there was to see. I consulted my map and remembered the directions that the man at the E.B. had told me and contentedly followed the road on and on and on.

I was to go through Camdenton and then about three miles outside that town would be the sign to Ha Ha Tonka State Park. Easy. Riiiight???

Mmmhhmm. Easy. Riiiiight. Except that as usual I paid more attention to the scenery and whatever else I was thinking about and zipped right smack dab through (or past, I still can’t remember which) Camdenton and was a couple miles outside Lebanon, another 20 miles or so down the road before I realized that I really ought to have arrived at Ha Ha Tonka. Thus, you see, the first installment of being Tonka’d. I’d been Tonka’d, and Tonka’d good. I was also kind of expecting better signage, such as, “Ha Ha Tonka State Park: 3 Miles Ahead on Right”, or, “On Right 3 Miles Ahead, Ha Ha Tonka State Park”….something of that sort. The sad fact of the matter is there WAS nothing of the sort, which is partly to blame, because I DID look for signs. Most of the time.
After coming into Lebanon, MO, and seeing that indeed the state park was near Camdenton and not Lebanon, at least on the map, I figured I might could be lost. I thought about just heading on to Baker Creek, but I really didn’t want to do that, and I still had time. So I turned the Oldsmobile around and barrelled back up to Camdenton. It only took about 15-20 minutes, because the speed limit was 65. Which means of course that I could go 70 because the speedometer in the car was about 5 miles off. I took the off ramp and puttered into the town of Camdenton.

Still no signs. But after remembering the man’s words, I knew I was headed in the right direction, so I went all the way through the town and came out in the country again. Suddenly, there was a sign! Ha Ha Tonka State Park. 3.8 M. Hurrah! It was 3.8 miles ahead on the left, which is where the arrow was pointing.

I zoomed on ahead. After going more than 3.8 miles ahead I figured I was once again on the wrong path. I had been Tonka’d again.

It was not till the last day of the trip that I finally figured out that Missouri does signs differently than Oregon. For one thing, they’re not nearly as well marked, places aren’t, and for another, when it marks it, it means you have to turn RIGHT THERE. The 3.8 means it was 3.8 miles on this road to the left. (I know, I’m slow, but give me a bit of grace, ok?)

After turning around for the second time that day, I finally managed to arrive at the office building and “Interpretive Center” for the state park.
The guy at the desk was friendly and told me where I could see stuff and some of the best stuff in a short time, since by now I did not have all day to while away.
I thanked him and started out on my exploration. This is Ha Ha Tonka State Park.

Ha Ha Tonka means, if I remember correctly, “Laughing Waters” in the native tongue there. In case you was wondering.

Apparently there was some really rich guy way back around 1900 that thought this particular part of Missouri was beautiful. He was right. So he made plans to move to this part and build himself a mansion.

In the pictures below, you can see the water tower, that pumped water up from the spring down below, the carriage house, and the mansion. They burned in 1942, only the stone parts are left. It was very very neat to look at, and by the size of it, must have been quite the mansion. 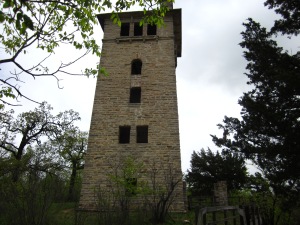 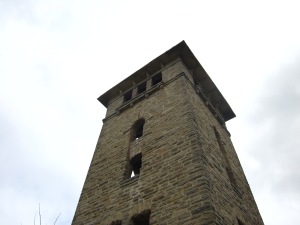 The Carriage House Remains….3 stories tall it was! 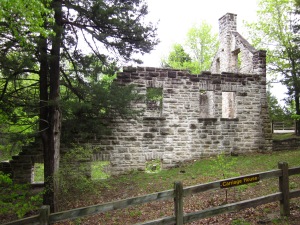 After looking around the remains of the buildings, I hopped down a few hundred stairs to the spring, which is the 12th largest in Missouri, then ran over and popped through a natural bridge. There was more to see, but it was getting on in the afternoon and I had to scoot. Definitely a place I want to revisit. It was very very pretty, I hope the pictures will help to give you a bit of a glimpse of how beautiful it really was.

Pictures of the Scenery Around the Area…

And then, I hopped back into the car and zoomed on south, cause it was gettin’ late in the day and I needed to be scootin’. I hoped to get down to Mansfield, MO, soon enough to get some supplies (like sleeping bags and matches, haha), and possibly to see the Laura Ingalls Wilder house in Mansfield before heading to Baker Creek Heirloom Seed Company for their Seed Festival which started on Sunday.

Next post coming up as soon as I can….it takes time to write all this out and choose which pictures to put in! So be patient, I’m doing the best I can. And I still have other posts to write up about…