Well, for one thing, it has to rain first. Which it did, most obligingly, for most all of the last week. Seems the drought here in Indiana has officially ended.

And it was cold.

And it was windy.

And I was so so so thankful that I had a nice place to work, out of the weather, and reasonably warm. Enter the greenhouse, a marvelous invention. You can smile at the rain and the sleet and wind blowing around outside and rat-tat-tatting on the greenhouse plastic, knowing that it can’t get you. Ha ha.

So. Once it gets through raining, allllllll that rain has to go somewhere. Which is what rivers are made for. So all the rain poured off the fields that have not been planted yet, and promptly flooded roads and basements and mini-Coopers with about several inches or more of water mixed with wonderful dirt. Yup, that’s 21st century farming for you. Plow your field up so hopefully a good strong rain will come and wash all that good topsoil right offen that there field. Now, since you don’t have any topsoil left, you need to buy a bunch of chemical fertilizers to keep your plants growing. But I’m getting out of bounds here. That’s a whole ‘nother “issue”, as it were.

The Eel River, which is about 4 or 500 feet from the farm at which I am living, pretty much swelled up and burst in about 24 hours. It was actually quite amazing. Checked it in the morning, and it was high. Really high. Someday I’ll have to get some pictures of the river at normal level, but anyway, yesterday morning it was up to just the bottom of the little bridge that spans part of the Eel River. We could still walk over the bridge to the other side.

Later, about mid-day, we walked down again. And the river had risen some more. We couldn’t even walk over the bridge now…only about half of the guard rails were visible. A log was stuck against one side of the bridge. All the water was swirling and muddy, full of good dirt from thousands of acres of plowed fields all the way up along the Eel River watershed. All this water is going into the Eel River, which goes into the Wabash River, which goes into the Ohio River, which ends up in the mighty Mississippi River, and, you guessed it, ends up right smack dab in the middle of the Gulf of Mexico, that beautiful stretch of water filled with oil, dead fish, alligator hunters, and a huge sudden inundation of about 1.4 million metric tons of soil from all over the Midwest. (okay, so that number is just made up. And I don’t know what metric tons are, but it sounded good)

In the evening of this melodious day, working in the greenhouses, laughing at the rain and wind that can’t get into the greenhouse, and watching all the huge fields across the river get flooded enough so one could ride a kayak on them if one so desired. This one might so desire if twas a tad bit warmer….Anyway, after supper, we headed down once again. And couldn’t even see the bridge. My, my, my. Just LOOK at all that water.

I’ve added a few pictures below for your convenience. 🙂

Ok, maybe not. I’ve been trying and trying to get pictures to come on here, and they aren’t. Sorry. I’ll try again Monday for pictures. 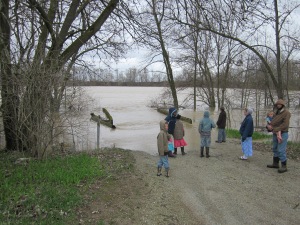 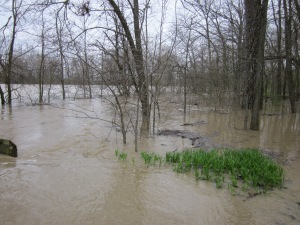 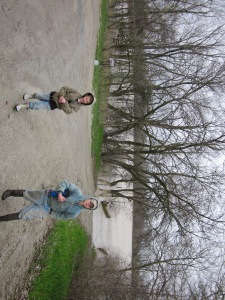 Annnd, the crowning glory of that wet and muddy day…..what happens when you try to walk the tiller through the ground…. 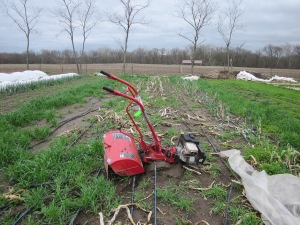 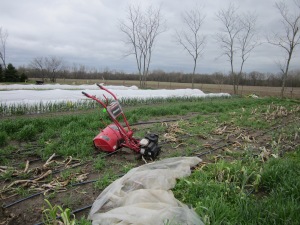 At least I wasn’t the one driving the silly thing. 🙂

Well, there are some pictures for you, finally!

Enjoy them. And if you don’t, I’ll have a word with you when I get back to Oregon.

6 thoughts on “What Happens When It Floods???”